Having an overview of all the important information has been taken to a new level with the new Zabbix dashboards. Dashboards now can be several, instead of the one dashboard in previous Zabbix versions.

Each dashboard consists of customizable widgets, the content of which the users themselves can choose. This is accomplished by integrating the best features of what previously was known as Zabbix screens into dashboards. So the new dashboard widgets contain a mix of the widgets that may already be familiar from the previous single dashboard as well as widgets containing the best features of Zabbix screens (such as graphs, simple graphs, maps, trigger overview).

Many elements that previously could be used to build a Zabbix screen can now be placed on the dashboard as a dashboard widget. Widgets can also be given a custom name. 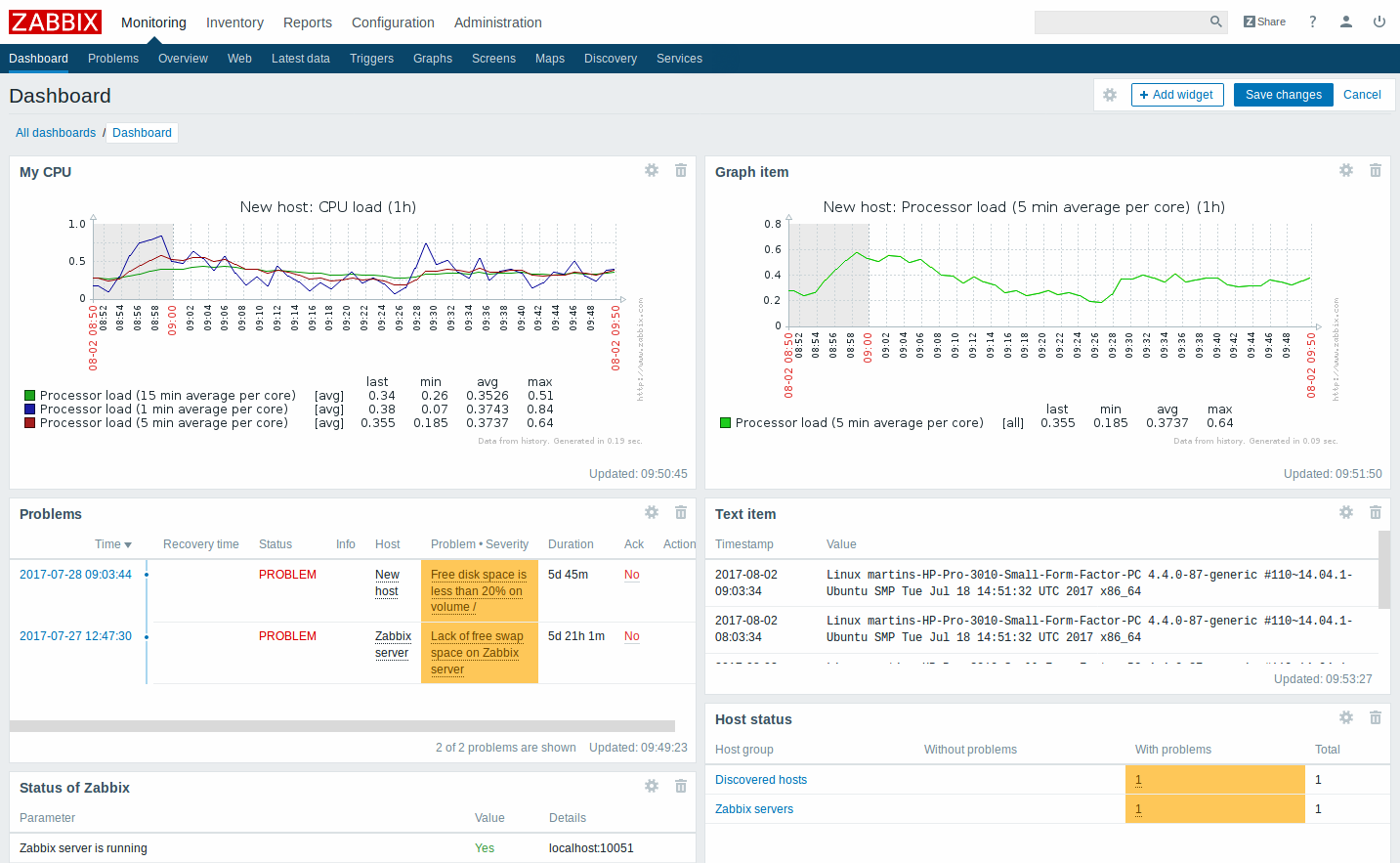 There are also completely new widgets:

The dashboard filtering functionality has been removed as a dashboard-wide setting. Instead, the filtering can be applied to individual widgets such as Host status, System status, etc.

has been added for modifying and accessing administration settings of a dashboard. It includes "Sharing" option to edit sharing preferences for the dashboard (e.g. share dashboards with other users and provide read only or write permission) as well as Create new, Clone and Display options. See viewing and editing a dashboard and sharing for more information.

This new widget allows to build a hierarchy of existing maps while also displaying problem statistics with each included map.

Statistics with the top level map in the hierarchy display a sum of problems of all submaps and its own problems.

To provide out-of-the-box monitoring for network devices such as switches and routers, new templates have been developed, based mostly on SNMPv2. Templates are provided for many families of network devices. For more information, see:

In Zabbix 3.4, remote commands and global scripts are correctly executed on hosts monitored by proxies. The command is executed by the agent on the target host.

It is also possible to execute a remote command or global script by the proxy itself. This is available as a new option in action operations/global script configuration - execute the command by the server or proxy, depending on whether the host is monitored by server or proxy.

Note that executing remote commands through proxies is disabled by default. In secure environments (encryption, SSH tunneling, etc), remote commands on a proxy can be enabled by setting the EnableRemoteCommands parameter to '1'. IPMI, SSH and Telnet scripts are executed even if remote commands are disabled.

There are situations when one item gathers multiple metrics at a time or it even makes more sense to collect related metrics simultaneously, for example:

Zabbix preprocessing options can be used to extract the part that is needed for the dependent item from the master item data.

A single alerter process was used in the previous versions to send problem notifications. Alerts were sent out one by one and, in large environments with a large number of events happening in close succession, delays with alerts could occur. Similarly, delays could occur in a mix of slow media types with fast ones (like SMS and e-mail) with the email waiting for the SMS to be sent.

In the new version, parallel processing of alerts is implemented. There is a new alert manager process that can distribute alerts to several "worker" processes, if needed. Media types are processed in parallel. The maximum number of concurrent sessions is configurable per media type, but the total number of alerter processes on server can only be limited by the new StartAlerters parameter. Alerts generated by one trigger are processed sequentially.

There are other related changes:

Now it is possible to receive a notification in all the ways available in Zabbix when a trigger-generated problem has been acknowledged. To accomplish this a new type of operation has been set up called acknowledgement operation with its own dedicated tab in action configuration. 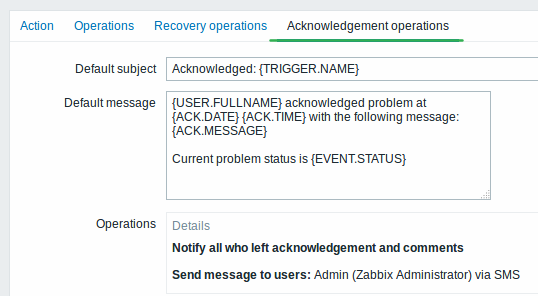 Remote commands can also be executed upon problem acknowledgement.

Default messages have been improved to provide more useful information:

When it comes to preprocessing item values before storing them in the database, Zabbix already had several options such as calculating delta value, using a custom multiplier, converting the value type or trimming long text values. These options existed as separate properties in item configuration or were hard-coded.

In the new version, all item value preprocessing is brought together and put in the hands of the user under a new Preprocessing tab in item configuration.

Several new options for value preprocessing have been added:

Additionally Delta (simple change) and Delta (speed per second) options have been renamed to Simple change and Change per second.

Previously, a JMX endpoint was hardcoded in Zabbix, which was limiting given that there are applications out there that use different endpoints. To lift this limitation, support for configurable JMX endpoints has been added as a separate field in JMX item configuration. When you open a JMX item, initially the field is filled with the default endpoint, however, that can be freely modified.

Low-level discovery of JMX objects is now supported by the new jmx.discovery[<discovery mode>,<object name>] item. This item allows to specify whether to discover MBeans or MBean attributes, as well as the pattern to look for. For more details, see the JMX discovery section.

When upgrading from previous versions, make sure to read the corresponding upgrade notes!

Previously variable values in web monitoring were passed to the scenario steps unchanged. Any URL-encoding of the values could only be accomplished manually.

GET and POST variable values entered in web scenario steps are now automatically URL-encoded. Encoding is applied no matter what type of data is used (text, macro, scenario-level variable or any combination of those). Encoding is performed before executing the step (data is saved unencoded in the database).

Values of scenario or step-level variables (macros) can be flexibly URL-encoded/decoded, depending on the chosen post variable settings in web scenario steps. For example:

Graphics in network maps have been moved from bitmap to SVG vector graphics.

Other improvements in maps include: 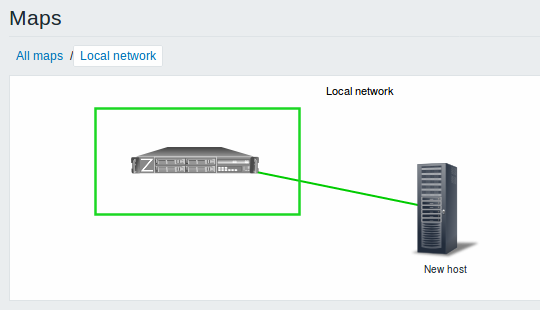 When creating a trigger-type map element, it is now possible to select multiple triggers for this element instead of one as before. 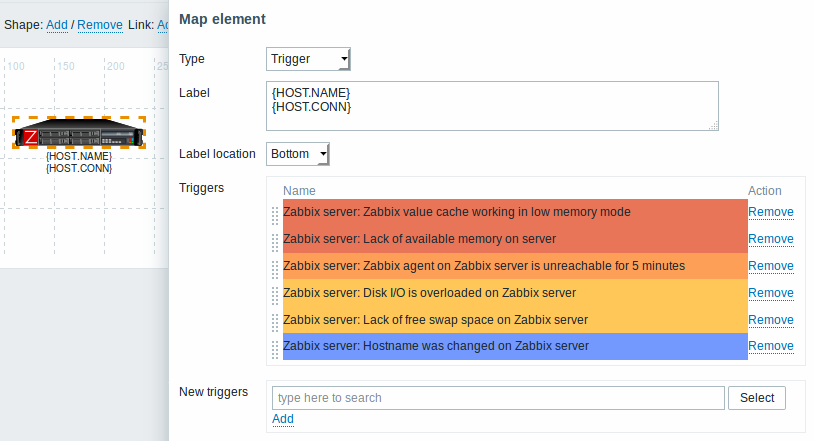 Additionally, the Expand single problem setting in map properties has been reworked into a three-way choice. The new option here is called Number of problems and expand the most critical one. This option is related to the multiple trigger support. If selecting this option, the most critical problem (highest severity trigger) will be displayed by its name on a map element, while the total number of problems will be displayed in another line. 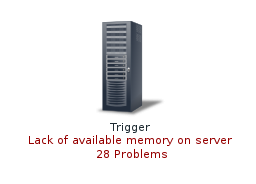 Drag-and-drop support has been introduced to map elements. Several selected elements can be moved to another place in the map by clicking on one of the selected elements, holding down the mouse button and moving the cursor to the desired location.

Map elements, when selected, can now be copied and pasted within the same map: 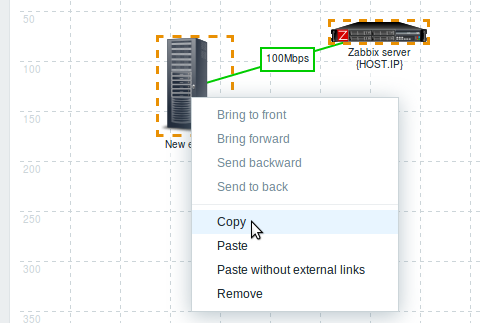 Several selected elements can now also be dragged and dropped in another place all together.

Rectangle and ellipse shapes can now be added in network maps. These shapes are a visual representation. For example, a rectangle shape can be used as a background to group some hosts. Shapes are not map elements and cannot be linked. Text can be added in the shapes. 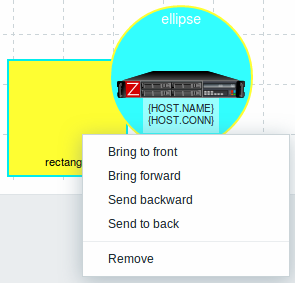 Free-draw lines are another element that can now be added now to a network map. 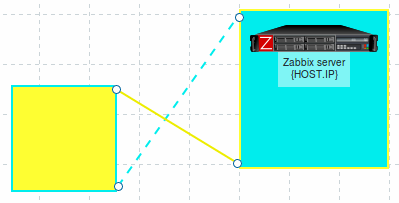 13 Support of macros and time suffixes in time periods

User macros and time suffixes (such as 30s, 5m, 2h, 1d, 1w) are now supported in item update intervals and many more locations where time periods are specified in Zabbix. It's important to note that in some time periods only user macro support has been added, while in some - only suffix support. For a full list of supported locations see:

In a related development, some upper/lower limits in time periods have been changed. Importantly, the History storage period for items can now be as short as 1 hour.

Support for Microsoft Internet Explorer 9 and Explorer 10 will not be provided any more.

15.2 Full cloning of screens and maps

Simple and template screens, along with network maps, can now be fully cloned meaning that not only the layout, but all included screen/map elements are cloned. 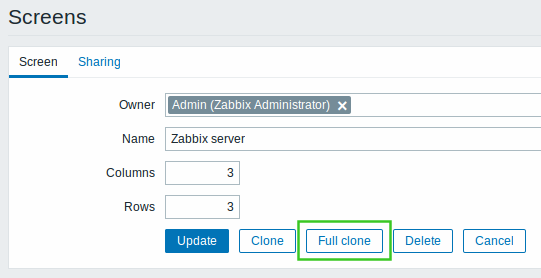 To fully clone a screen, click on the Full clone button, which will temporarily save the screenid, then give the screen a different name and click on the Add button that will create a new screen with all screen elements that fit in the screen layout.

The style for radio buttons and checkboxes has been unified across different browsers. 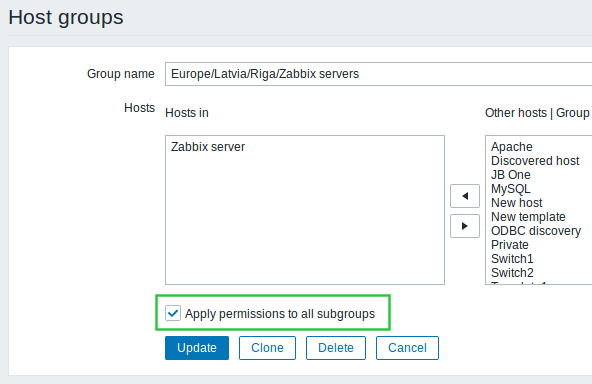 Previously one BMC controller could be queried by different processes. To improve the polling speed every IPMI poller kept a connection cache. With a large number of IPMI pollers this could easily overloaded BMC controllers.

EnableRemoteCommands and LogRemoteCommands parameters have been added to the proxy configuration file, as remote commands are now supported through proxies as well. Both are disabled by default.

While the upper limit of the MaxLinesPerSecond agent parameter remains the same (1000), this limit of new log lines the agent can send per second to Zabbix server is now multiplied by 10 (instead of 4) when it comes to the total amount of lines that can be read by the agent.

Previously, in case of a Zabbix agent metric thread crash only a one-line error message was logged. Now additional information including the program counter, register, stack frame (only in the 32-bit version) and a backtrace is provided in the agent log file in this case. In a minor additional improvement the logged return values of executing metric threads have been changed from numeric to string for better readability.

A new vfs.dir.size agent item has been added to monitor directory size. This item is supported on UNIX and Windows platforms.

For the proc.num agent item two additional states are supported:

A new zabbix[host,discovery,interfaces] internal item has been added to return all host interfaces configured in Zabbix frontend. This item can be used in low-level discovery.

A new zabbix[preprocessing_queue] internal item has been added to count the values enqueued in the preprocessing queue.

{EVENT.VALUE} and {EVENT.STATUS} macros have been changed and now return (for trigger and internal events):

Now Zabbix checks exit codes for user parameters, remote commands and system.run[] items without the “nowait” flag as well as Zabbix server executed scripts (alert, external and global). In case of an error in a script or a command execution process Zabbix provides error description in the frontend as well as creates corresponding log entries.