Currently the support of scheduled reports is experimental.

To create a scheduled report in Zabbix frontend, do the following:

You can also create a report by opening an existing one, pressing the Clone button, and then saving under a different name. 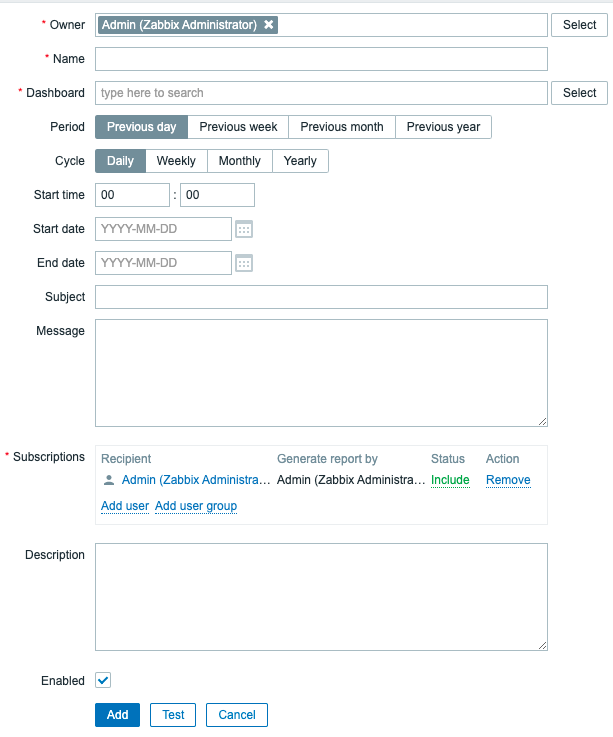 *Users with insufficient permissions are users who have a role based on the Admin user type and are not members of the user group the recipient or the report owner is a member of.

To test a report, click on the Test button at the bottom of the report configuration form.

Test button is not available, if a report configuration form has been opened from the dashboard action menu.

If the configuration is correct, the test report is sent immediately to the current user. For test reports, subscribers and 'generated by' user settings are ignored.

If the configuration is incorrect, an error message is displayed describing the possible cause.

To update an existing report, press on the report name, then make required configuration changes and press Update button.

If an existing report is updated by another user and this user changes the Dashboard, upon pressing the Update button a warning message "Report generated by other users will be changed to the current user" will be displayed.

Pressing OK at this step will lead to the following changes:

Pressing Cancel will close the popup window and cancel the report update.

To quickly clone an existing report, press Clone button at the bottom of an existing report configuration form. When cloning a report, created by another user, the current user becomes the owner of the new report.

Report settings will be copied to the new report configuration form with respect to user permissions:

Change required settings and the report name, then press Add.