Sometimes you may want to change some attribute for a number of hosts at once. Instead of opening each individual host for editing, you may use the mass update function for that.

To mass-update some hosts, do the following: 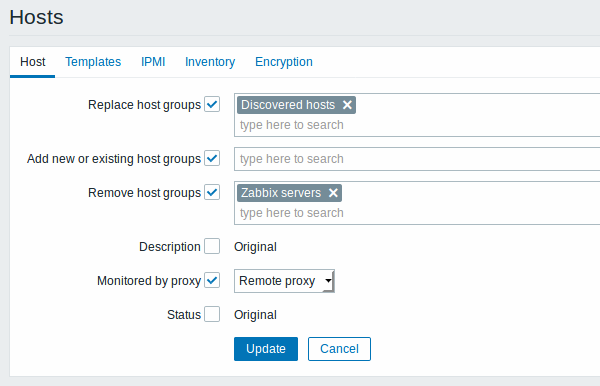 Replace host groups will remove the host from any existing host groups and replace those with the one(s) specified in this field.

These fields are auto-complete - starting to type in them offers a dropdown of matching host groups. If the host group is new, it also appears in the dropdown and it is indicated by (new) after the string. Just scroll down to select.

To update template linkage in the Templates tab, select Link templates and start typing the template name in the auto-complete field until a dropdown appears offering the matching templates. Just scroll down to select the template to link.

To be able to mass update inventory fields, the Inventory mode should be set to 'Manual' or 'Automatic'.

When done with all required changes, click on Update. The attributes will be updated accordingly for all the selected hosts.