HARP Adopts the Latest LTS Version of Zabbix 5.0 with a View to Expanding Future Service Infrastructure;
Reliably Fixing Small Details is One Point of Long-Term Use

Monitoring of a wide range of operating systems and network devices

A monitoring solution which can meet customer needs, monitoring targets, and expansion of resources

A variety of platforms to be monitored

All functions free and able to be utilized, functional improvements reflect the needs of users well.

Complete levels of monitoring for each service

It is now possible to omit the work of selecting and installing monitoring systems.

HARP, which has provided ASP and SaaS services to the Hokkaido government and local governments within Hokkaido, promoting shared IT infrastructure and electronic application and facility reservation services, has been using Zabbix for about ten years and has moved to the latest LTS version, Zabbix 5.0. As digital technologyʼs role in local government functions increases, the company is working to make more comprehensive monitoring platforms a reality.

HARP Co., Ltd. (hereinafter referred to as HARP), established in the form of a third sector organization in 2004 based on the “HARP Concept” established by Hokkaido to promote the efforts of local “electronic governments,” advocated for the shared use of IT infrastructure even before cloud services became a fixture of modern society. Beginning with Hokkaido and with local governments nationwide in their sights, they have been responsible for the design, creation, and operation of local government cloud services in collaboration with LGWAN (Local Government Wide Area Network).

Mr. Kodai Sotozaki, IT Infrastructure Group, Project Promotion Department, states, “We also provide systems for performing procedures for local tax portal system eLTAX, and we provide services while taking care to avoid anything which causes residents to be unable to use various services.”

The Adoption of OSS Zabbix, Which Can Monitor a Wide Range of Targets, as a Companion to Infrastructure Integration

HARP initially built foundations for each of its services individually. Of course, the person in charge of operating the monitoring systems for each also differed. “At first, we had a small number of services, and people visually checked monitoring screens every morning, operating in a way in which if there was a problem, we would respond. However, since the number of services gradually increased, we decided to consolidate them into one infrastructure.” (Mr. Sotozaki)

Along with this, they thought to achieve centralized monitoring and reduce the operational load by also integrating monitoring infrastructures into one.

Before that, open-source software (OSS) tools such as MRTG and Cacti were installed at the discretion of each person in charge, in addition to some commercial monitoring tools. However, when considering covering multiple layers of service provision from IaaS to SaaS, and at the same time employing cross-functional and comprehensive monitoring of multiple expanding services, Zabbix became a powerful option, as in addition to reducing cost as an OSS, it can monitor a wide range of devices.

“At the time, I think there were very few tools besides Zabbix with which it was possible to monitor servers across a wide range of operating systems like Linux, Windows, and UNIX without installing an agent, and to monitor network devices as well.” (Mr. Sotozaki) For Mr. Sotozaki, who had personally encountered and tried Zabbix, “it was easy to implement from the outset just with information available from the internet and the community, and without us having to go through a paid support service.”

Migrating to Zabbix 5.0 with a Focus on a Future of Ever-Expanding Services

So, in 2010, HARP consolidated the infrastructures of multiple services into one and adopted Zabbix 2.0 to centralize services’ monitoring. By adopting an OSS, they could curb costs such as licensing, create a mechanism that would not be locked in by a specific vendor, and secure the public nature required of a local government system. Besides, there were variations in the monitoring services level in the past, where some services were viewed with in-house tools, and others came with commercial monitoring tools installed as a set. This issue was also resolved. Above all, the best part was choosing software that was easy for Mr. Sotozaki and his colleagues to actually operate.

However, systems are living things. Around that time, virtualization technology was beginning to spread, and services expanded further in response to customers’ demands. “As the number of services and virtual machines to be managed increased, it became apparent that we would reach our capacity limit in our initial resource design. Besides, there were issues in the operational design, such as visualization of failure status for each service and the implementation of public cloud monitoring, so we decided to rebuild the monitoring infrastructure with a new version.” (Mr. Sotozaki)

HARP had been gradually upgrading Zabbix, but as they considered performance tuning and future expansion of resources, they believed that PostgreSQL’s Timescale DB would be more effective than MySQL, which had been utilized by previous versions of Zabbix, so in December 2020, they migrated to Zabbix 5.0 which had adopted Timescale DB as its database and started operation of their new monitoring system. They also hoped to improve deletion processes taking a long time when large amounts of monitoring data had been accumulated.

The new monitoring system consists of two Zabbix servers and ten Zabbix proxies and monitors about 1,000 devices. There are about 7,000 monitoring triggers, and the number of items is said to reach about 30,000. Still, Mr. Sotozaki states, “We are actually revising our monitoring quite a bit, and the monitoring scale has shrunk to about two-thirds compared to before.”

“In the past, we didn’t apply suitable enough filters and automatically collect a variety of things, including non-essential items, but we’ve revised that. At the same time, we’re sizing so that processing can be done without issue, even if services expand in the future, and we’re rebuilding after evaluating its ability to maintain performance even if the scale expands to around ten times its current performance.” (Mr. Sotozaki)

The Point of Long-Term Use: Reliably Fixing Areas of Small Detail

In migrating to Zabbix 5.0, HARP also introduced the support of Zabbix Enterprise. “When you’re starting small, it’s possible to move forward while referring to community information, but as the scale grows, there will be parts you just aren’t able to grasp on your own even if you focus minutely on the operation.” (Mr. Sotozaki) On the contrary, if your business is growing and expanding in scale, there are plenty of options to invest in professional know-how regarding building suitable operations.

After more than ten years of working with Zabbix and upgrading to version 5.0, Mr. Sotozaki recalls “reliably fixing areas that are finely detailed and troublesome for operators” as an advantage of Zabbix.

“Not only is the tag function installed with Zabbix 5.0 quite good, but every time the version is upgraded, more functions are added and improved in detail. Even if it seems difficult to use at first, if you are patient with it for a little while, it’ll be fixed, and I’m grateful for that.” (Mr. Sotozaki) That has been one of the reasons Zabbix has continued to be used for such a long time.

In addition, because the security level required by the Ministry of Internal Affairs and Communications for local governments has increased, in light of the seriousness of cyberattacks, “if, with security monitoring also integrated into Zabbix, we can check whether the settings required by security guidelines are set and whether any suspicious services have been activated, we think we can do even more to meet the needs of our customers.” (Mr. Sotozaki)

As digitization continues from the impact of novel coronavirus and local government operations becoming more electronic, we will continue to provide stable services by making the best use of Zabbix. 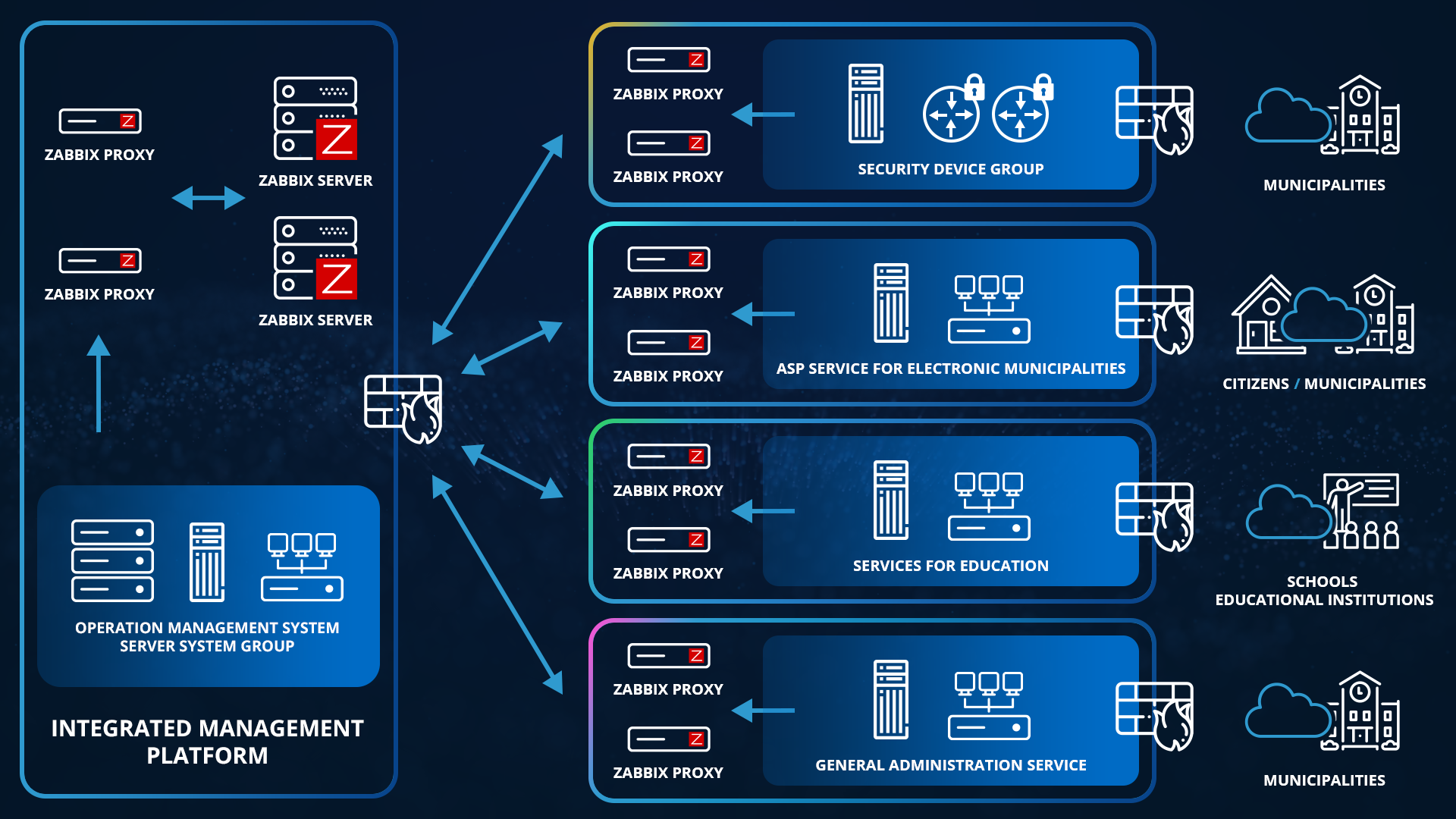 They will continue to provide technical support services for monitoring systems using Zabbix, based on the know-how and achievements of monitoring system construction and operation they have cultivated through the operation of cloud infrastructures for local governments.