Nifty is using VMware products and they had performance issue for their original scripts which are used for monitoring in combination with Zabbix because the monitored environment was getting larger.

To monitor with same software, same interfaces, same standards even if the platforms of monitored devices are deferent.

Reduced operation cost by automation of add, delete and group the monitored devices

Nifty started providing its Japanese “Nifty Cloud” in the year 2010, and now boasts more than 4,100 installations. This is being developed as a full stack service comprising, in addition to IaaS services, PaaS, which also brings together the overarching development environments, and SaaS, which provides immediately useable online shopping sites, etc. The feature of this service is that excellent SLA is established and high-quality services are provided using multiple data centers, even using the @nifty service.

The foundation of this series of services is the “vSphere ESXi” virtual machine monitor, which provides VMware. “Zabbix” is used for monitoring of its actual operating status. Zabbix Server, in tandem with “VMware vCenter Server”, implemented low-level discovery and performance monitoring in environments that are large in scale even on an international level.

According to Mr. Yuya Kusakabe of Nifty Corporation’s Cloud Infrastructure Department, which is part of the Cloud Division, Zabbix Development Services are what made it possible to perform monitoring of VMware environments.

These services are incorporated into Zabbix itself, developing functions originally not included in Zabbix to suit individual requests. Their contents are varied, ranging from fine-tuning through to large-scale customized projects, and there are two methods: development of specific functions to suit individual environments, and sponsored development of general functions together with other users. Virtualized environment monitoring functions fall into the latter category, having been developed with support from Nifty, and were officially supported by Zabbix 2.2.

Strengths of open source – “when it comes to the crunch, you can fix problems by yourself”

Originally, Nifty was using Zabbix for monitoring of various systems such as Nifty Cloud Storage and Control Panel, etc. Mr. Kusakabe explains: “With previous monitoring tools, the granularity of graphs shown when trouble occurred was rough, and system limitations made it impossible to perform repairs such as customization of monitoring items.”

In that respect, Zabbix contains all of the necessary functions, including performance monitoring, graph display and alerts. Its versatility is highly rated, and it is now used in most monitoring.

Mr. Kusakabe says that another main factor is that Zabbix is open source software: “The source code is visible, so no matter what has happened, it’s possible to fix it by yourself if it’s just a small problem. That cannot be done with software where the source is invisible, and that becomes quite irritating.”

Using Development Services to cooperate towards a single goal, decide on specifications and even fix bugs

Following this line of reasoning, Nifty considered the possibility of direct monitoring of vSphere ESXi and the virtual machines that run on it.

Up until then, Nifty had been acquiring information from vCenter Server by using proprietary scripts previously created with Perl, and then delivering the calculated results to Zabbix. However, Mr. Kusakabe, explains that “this method had poor performance, as well as the problem of burden being imposed on vCenter Server itself. That’s why we started looking into other means of monitoring.”

There were several pieces of business software that were also candidates, but in all cases the cost element was impossible to balance. Just as that point Mr. Kusakabe found out that “virtualized environment monitoring functions” had been raised as a request for Zabbix Development Services, and he suggested cooperating with this, which led to Nifty investing in the development.

This was before the establishment of Zabbix Japan. Kodai Terashima, who now works as the representative of Zabbix Japan, acted as the point of communications on the Head Office side and decided on the specifications. The results of this were featured as virtualized environment monitoring functions in Zabbix 2.2, which was released in November 2013.

While the funding required for serial development is provided by Nifty, the deliverables are provided in a merger with Zabbix itself. With regard to making deliverables open while one’s own company bears the cost, Mr. Kusakabe says: “Since we wanted to spend as little as possible on application and monitoring, we decided it would be better to go for open source and ensure that no further cost would be incurred in future version upgrades.”

However, the number of virtual machines under monitoring by Nifty is on one of the largest scales in the world. Therefore, unexpected bugs that could not be found in the verification environment also came to be detected. Mr. Kusakabe explains: “We used to test virtualized environment monitoring functions in a verification environment, in the end with official support from Version 2.2, so when we went into the actual environments in order, we realized that it was possible to perform monitoring only for up to 100 vSphere ESXi machines.”

Mr. Kusakabe immediately created a patch by himself, and issued a bug report to Zabbix HQ together with the source code. “The support we received thereafter was smooth,” he says. “Many other modifications were also made to improve performance, and looking at the modified parts it was clear that excellent fine-tuning had been carried out, with code written by extremely talented C programmers.” Thus, after many twists and turns, Version 2.4 came to be used from the beginning of 2015 for full-blown monitoring of VMware environments.

Going forwards, Nifty also plans to use Zabbix for monitoring of physical machines. Ultimately, the company is aiming to achieve “autonomous infrastructures that can cut themselves free from trouble like living creatures, automatically recovering after repairs”.

Mr. Kusakabe concludes: “Some kind of sign often appears before hardware trouble occurs. We are planning to achieve further automation by using Zabbix action functions in order to take these omens and detach the components before the trouble actually affects the customers. We feel that Zabbix holds the key to achieving autonomous data centers and infrastructures like living creatures.” 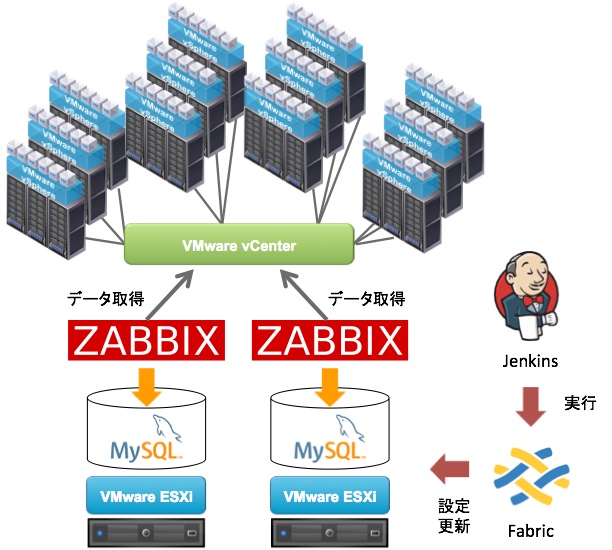 The company provides connection service for optical fiber and high-speed mobile communication, web services and a wide variety of applications as well as cloud service ’Nifty Cloud’ Backed by its corporate message of “With Us, You Can,” the company provides high quality, security and safety services and supports customers more convenience and affluence daily life.