Establishing a stable service level by reducing downtime to the absolute minimum.

Implemented Zabbix with a multiplexed intra-server network with a possibility to change the degree of multiplexing, expanding instantly when the database load rises.

Monitoring of more than 1,000 devices on different platforms.

Instant reaction and action if the system load rises.

Using data gathered through Zabbix as information for decision-making in administrative conferences.

The goal: “Service will not stop, no matter what”

As a major Internet securities firm, Rakuten Securities, Inc. (Rakuten Securities) was used by over 1.74 million customers as of the end of September 2014. The company provides services and products that leverage its status as a member of the Rakuten Group through measures like the introduction of a point program that can also be used for shopping on Rakuten Ichiba.

Establishing a stable service level is an absolutely vital issue for online securities providers. Issues such as problems with logging in or inability to process orders for buying and selling can cause massive losses for clients or customers.

“I would like to distinguish our brand via three points: service level improvements, stability, and product lineup. If we can pursue our goal of in reducing downtime to the absolute minimum, I feel this will definitely allow us to win out in sales eventually,” said Mr. Shinobu Hirayama, CIO/CSO and General Manager of Information System Division, Rakuten Securities.

Understanding system-operating conditions is a major prerequisite of bringing about improvements in service levels. Therefore, the company uses Zabbix for its monitoring tools. “Assuming the system will have problems, I think it is important to know whether or not problems are occurring, where they are occurring, and what alternative means are available to avoid them,” Mr. Hirayama stated.

A key point in selection: Multi-architecture and multiplatform compatibility

As a pioneer in the Internet securities, Rakuten Securities has been providing services since before the widespread adoption of broadband Internet. However, they faced problems that accompanied this pioneering status. Historically, as a result of services progressively expanding according to market needs, different platforms and architectures were adopted for each service provided.

The platform for handling stocks, investment trusts, bonds and other marketable securities was among the oldest they used, and its hardware, middleware and software (including databases) were all composed of Oracle products. They also had a system for FX that had begun operation in 2013, which was based on IBM products. Additionally, in absorbing and merging with subsidiary Dot Commodity, an Internet commodity futures provider, they absorbed its system based on Microsoft products in July of 2014.

Of course, monitoring software was provided specifically for each platform. However, in addition to the proportional costs incurred, this software is useless with regard to other platforms. Rakuten Securities wanted to conduct operational monitoring across completely different platforms, using the same structure and with good cost performance. Therefore, that is why they selected Zabbix.

“It’s inefficient to conduct separate operational monitoring on each platform and architecture. A major reason we selected Zabbix was the ability to use the same software, interface, and standards in monitoring across different platforms,” explained Mr. Hirayama.

Bottlenecks were focused on in the expanded databases

Rakuten Securities uses Zabbix for resource monitoring, error monitoring, and bottleneck monitoring. This monitoring extends across all platforms, and encompasses channel servers that send data over the web and to smartphones, stock order enforcement servers that conduct processing between transaction sites, middleware that conducts background processing for the previous servers, back-end servers, and more.

Among the items monitored, databases are subject to particularly focused monitoring. The system is set up in a three-layered structure, made up of front-end web content, middleware that processes business logic, and databases. By using a design that deliberately forces bottlenecks into databases, this structure allows for flexible performance improvements to the overall system according to fluctuating transactions.

Mr. Hirayama claimed, “We have multiplexed our intra-server network, and made it possible to change the degree of multiplexing. Through raising the degree of multiplexing, we have a design that puts pressure on databases without stressing the network. We monitor the core database load thoroughly using Zabbix, and expand instantly when the load rises. This improves overall system performance.”

As individual investors increase in numbers, the number of people using Internet securities has also continued to increase. Rakuten Securities has also been impacted by this shift, and is working to improve performance and capacity. Their use of “Oracle Exadata” on their core databases is one such move.

“Since our actual hardware is brand new, its performance in processing improved by about 10 times over. At first the structure was to use two Exadata units, but currently we have expanded farther than this. We currently have six units running in a real environment. If the load gets too high even for those, the design allows us to connect a development unit to conduct processing, as well,” said Mr. Hirayama. This kind of response is possible due to routine monitoring.

Mr. Hirayama says that “each week’s number of transactions, response times, and computer resource hiccups are displayed as output in the program’s history function, and we follow up on the presence or absence of problems,” at weekly administrative conferences held on data gathered through Zabbix. The system’s operational status is directly tied to their competitiveness.

“You don’t look at individual points in this kind of data; you match it up to find meaning and to make it into something that can be evaluated. Then you automate that, and make it into something that can be shown in real time. I want us to be able to provide data as promptly as possible, not just within the information systems division, but also to share it with the administrators and customers. In that regard, I feel we have a wide variety of uses for Zabbix, with the APIs provided,” said Mr. Hirayama. We look forward to seeing this company provide stable services in an increasingly dynamic securities market. 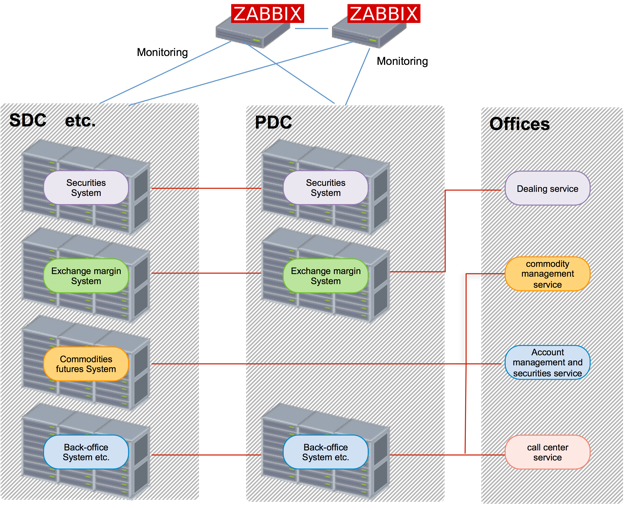 Rakuten Securities, Inc. is an Internet securities firm of Rakuten group, which operates one of the biggest internet shopping mall in Japan. In Jun 1999, the company started its services as the first pure-online-play securities in Japan.

Rakuten Securities always puts itself in a customer's shoes and provides services such as; released original trading tool, ‘Market Speed’ ; and started to deliver automatic renewal stock prices to individuals on a real-time basis for the first time in Japan.

Rakuten Securities provides services and products, which maximize the advantage of Rakuten group like; adopting the point program which is able to use for shopping in Raten Ichiba; and providing financing services in cooperation with Rakuten Bank and Rakuten card.