With remote commands you can define that a certain pre-defined command is automatically executed on the monitored host upon some condition.

In the most obvious uses of the feature you can try to:

Remote commands are not supported to be executed on Zabbix agents monitored by Zabbix proxy, so for commands from Zabbix server to agent a direct connection is required.

Remote command limit after all macros expansion depends on the type of database and character set (non- ASCII characters require more than one byte to be stored):

Remote commands are executed even if the target host is in maintenance.

The following tutorial provides step-by-step instructions on how to set up remote commands.

Those remote commands that are executed on Zabbix agent (custom scripts) must be first enabled in the respective zabbix_agentd.conf.

Make sure that the EnableRemoteCommands parameter is set to 1 and uncommented. Restart agent daemon if changing this parameter.

Remote commands do not work with active Zabbix agents.

Then, when configuring a new action in Configuration→Actions:

In this case, Zabbix will try to restart an Apache process. With this command, make sure that the command is executed on Zabbix agent (click the Zabbix agent button against Execute on).

Note the use of sudo - Zabbix user does not have permissions to restart system services by default. See below for hints on how to configure sudo.

Zabbix does not check if a command has been executed successfully. 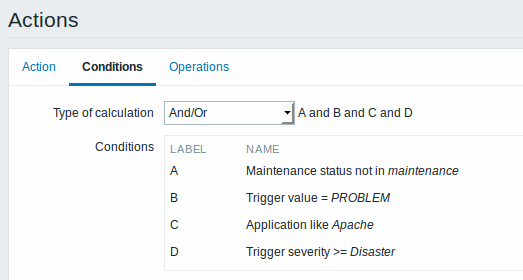 Make sure that the 'zabbix' user has execute permissions for configured commands. One may be interested in using sudo to give access to privileged commands. To configure access, execute as root:

Example lines that could be used in sudoers file:

On some systems sudoers file will prevent non-local users from executing commands. To change this, comment out requiretty option in /etc/sudoers.

If the target system has multiple interfaces of the selected type (Zabbix agent or IPMI), remote commands will be executed on the default interface.

For IPMI remote commands the following syntax should be used:

Restart of Windows on certain condition.

In order to automatically restart Windows upon a problem detected by Zabbix, define the following actions:

Power off the host by using IPMI control.