SSH checks are performed as agent-less monitoring. Zabbix agent is not needed for SSH checks.

If you do not intend to use keys, no additional configuration is required, besides linking libssh2/libssh to Zabbix, if you're building from source.

To use key based authentication for SSH items, certain changes to the server configuration are required.

Open the Zabbix server configuration file (zabbix_server.conf) as root and look for the following line:

Uncomment it and set full path to a folder where public and private keys will be located:

Save the file and restart zabbix_server afterwards.

Usually installation packages of zabbix-server from different OS distributions create the zabbix user account with a home directory in not very well-known places (as for system accounts). For example, for CentOS it's /var/lib/zabbix, for Debian it's /var/run/zabbix.

Before starting to generate the keys, an approach to reallocate the home directory to a better known place (intuitively expected) could be considered. This will correspond with the SSHKeyLocation Zabbix server configuration parameter mentioned above.

These steps can be skipped if zabbix account has been added manually according to the installation section because in this case most likely the home directory is already located at /home/zabbix.

To change the setting for the zabbix user account all working processes which are using it have to be stopped:

To change the home directory location with an attempt to move it (if it exists) a command should be executed:

It's absolutely possible that a home directory did not exist in the old place (in the CentOS for example), so it should be created at the new place. A safe attempt to do that is:

To be sure that all is secure, additional commands could be executed to set permissions to the home directory:

Now steps to generate public and private keys can be performed by a command:

Note: public and private keys (id_rsa.pub and id_rsa respectively) have been generated by default in the /home/zabbix/.ssh directory which corresponds to the Zabbix server SSHKeyLocation configuration parameter.

This step should be performed only once for every host that will be monitored by SSH checks.

By using the following command the public key file can be installed on a remote host 10.10.10.10 so that then SSH checks can be performed with a root account:

If the login is successful, then the configuration part in the shell is finished and remote SSH session can be closed.

Actual command(s) to be executed must be placed in the Executed script field in the item configuration.
Multiple commands can be executed one after another by placing them on a new line. In this case returned values also will be formatted as multi lined. 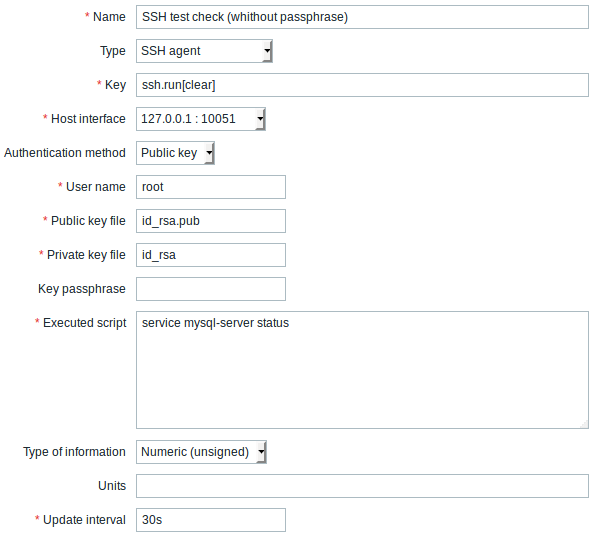 The fields that require specific information for SSH items are: